Many different automations can be built using Jira's native rules. However, as we mentioned in the above video, in multi-project and global automations, Jira Cloud Standard allows for a maximum of only 500 executions per month. This is a very small amount and can often be reached in hours, or even minutes. If your team exceeds this limit, automations simply stop running. With JMWE, you can run an unlimited number of workflow automation rules.

“As a Jira Cloud Standard admin, I was relying on the Automation allowances native to Jira Cloud - and quickly surpassed the 500 transactions / month, even though the team is very small and we have very few automations enabled. Increasing this would mean switching to Jira Cloud Premium, which is twice the cost of the app and all of our add-ons. JMWE is a much better value and has a lot more flexibility than Jira's automation - and you can save the native automation for smaller autos that won't be run as much.”
- Nicki Repici

“I can't recommend JMWE enough. Jira Automation is ok for relatively simple [tasks], but [JMWE] can handle an incredible level of complexity in comparison."
- Andrew Zietara 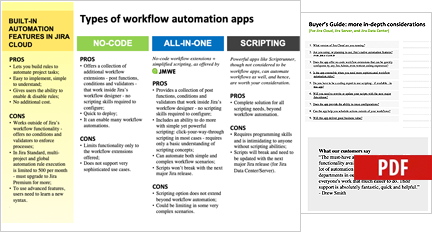 Check out this JMWE's Buyer's Guide [PDF]. While it covers many of JMWE’s advantages, it will also help you understand native Jira automation features, as well as other types of automation apps.

Explore all in under 45 minutes

Automating outside of workflows

Other things to know